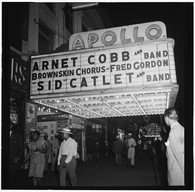 Transcription of 90 years of theatre programs from the Yale School of Drama, Yale Repertory Theatre, and other theatrical groups on campus.

Transcribing historical theatre programs. Capturing key information about the performances these programs represent. Stuff like: theater name, location, show title and date, as well as details such as cast lists, production staff and the antiquated advertisements found throughout.


This project consists of transcribing information on the cards into 4 columns: Artist, Name, Payment, Comments

The Apollo Theater hosted numerous performances by popular entertainers who were primarily African-American, including Ella Fitzgerald, Billie Holiday, Smokey Robinson, and the Temptations from the early 1930s to the present. In 1934, Frank Schiffman became the first manager of the Apollo Theater. Soon thereafter, he became co-owner, and retained the management position until the early 1960s. During the late 1940s and early 1950s, Schiffman's sons, Jack and Robert assisted him with the management of the Apollo, and later took over management when Frank Schiffman's retired. To manage the Theater, the Schiffmans kept a number of different types of records, including “booking cards,” organized by the name of the artist, which detail the dates of performances; fees paid; and brief, but often quite candid, opinions on the quality of the performances, the performers and their drawing power (or lack of it). These helped the Schiffmans to determine future bookings and contracts.
​


Go to My Public Profile      http://crowdsourced.micropasts.org/account/maria/
Community Leaderboard: Rank 4 of 2103 with a Score of 8330 contributed tasks  (Last update: June 2020)

Ancient Lives is a collaboration between a diverse collection of Oxford Papyrologists and Researchers, The Imaging Papyri Project, The Oxyrhynchus Papyri Project, the Egypt Exploration Society and the following institutions.

The papyri belong to the Egypt Exploration Society and their texts will eventually be published and numbered in Society's Greco-Roman Memoirs series in the volumes entitledThe Oxyrhynchus Papyri.

Founded in 1846, the Smithsonian is the world's largest museum and research complex, consisting of 19 museums and galleries, the National Zoological Park, and 9 research facilities.

Launched in July 2013, the Smithsonian Transcription Center seeks to engage the public in making collections more accessible. Digital volunteers are invited to transcribe historic documents including diaries and working papers of prominent Americans and records associated with the Smithsonian's vast scientific collections. Transcription makes these important materials more accessible to researchers around the world, as well as the general public. 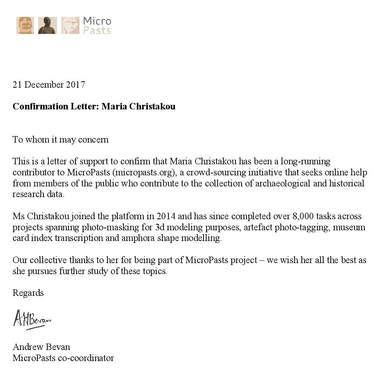